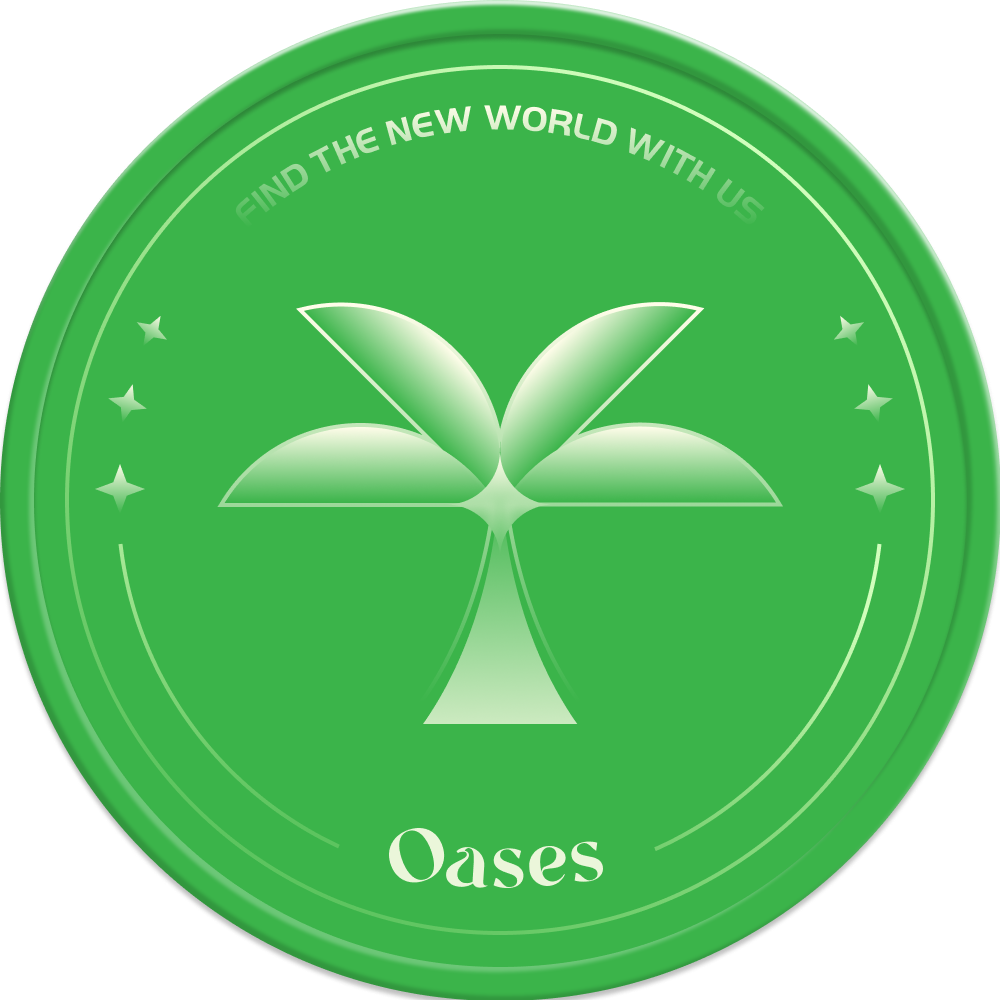 The mainnet launch of Oases has exceeded our expectations, and we are happy to see the results from everyone's efforts. It is a process, and we work tirelessly to improve the platform as we currently do, e.g., missions with rewards for participation to refine and improve. As seen in our roadmap, we have innovative functionality in the pipeline that will be released in the near future. Maybe the most important part of our vision when we started working on the Oases platform was decentralization. That brings us to one of the oldest topics in the crypto space, which is why we find it interesting to look at what it means for the NFT space.

The NFT space is interesting as it has provided much real-world use in a short period, attracting many people who have not been into crypto before. Whether gaming, art, fashion, or other niches, NFTs have quickly moved into the mainstream on a level not seen in crypto before. In the following picture, we see a strong indication that the influx into the crypto space is through NFTs.

If you are not new to the space, you probably know how big of a topic decentralization is. For anyone that is newer and has maybe entered crypto because of NFTs, it could still be a new question. Therefore we are sure it’s important to raise the question of decentralization. In this piece, we will start breaking down the topic, going back to the origin, and begin mapping the current status in the space, specifically focusing on NFTs. We will look at the topic at a higher level, and because of the complexity, we aim to dig deeper into specific subtopics in further articles.

Humans lived for a long time in tribal groups, which could be described as a decentralized way of organizing socially. In a tribe, you were all depending on the group and thus were all incentives aligned as fair utilization of resources and labor would enhance everyone's chances of survival. This would foster mutual trust between tribe members personally and peer-to-peer. From there, we have grown into a very complex socioeconomic web. Individuals no longer depend on each other for survival but are directly competing for resources. With this constant mode of competition, trust has naturally become an issue. This has shaped our societies, and we now have trusted third-party institutions that set our common rules and bridge the trust barrier, for example banks when it comes to the custody of assets and financial transactions. We also have the centralized web2.0 big tech firms with their platform-based digital ecosystems that have essentially become natural monopolies that the companies own. We have ended up in a structure with high levels of centralization because it has facilitated collaborative organization in societies and has, in some cases, proven to be an efficient way of organizing, with the economics of scale and network effects as examples. Still, centralization introduces the risk of central point of failure and middle-men inefficiencies which in some cases are entirely unnecessary.

There is no exact definition of decentralization, but it could be described as the process of distributing or dispersing functions, power, people, and things away from trusted third parties. So decentralization is partly a social construct, but when it comes to digital networks like a blockchain, it also involves technical aspects. This makes it subjective and most importantly, a spectrum rather than binary. This is important to remember as something like 100% decentralization is no concrete state and is practically unachievable and maybe even undesirable as some factor of decentralization comes with drawbacks.

The core innovation of the blockchain

Bitcoin and its blockchain was an invention that brought decentralization to the digital realm. It solved the classic double spend problem that had always been a practically impossible issue in the digital realm. This limited early digital environments like the internet, e.g., as data could be replicated without any way to trace authenticity or origin. As discussed in our digital ownership article, the internet could not inhabit value in a digitally native way like the physical world. Blockchain technology is a peer-to-peer network that is verifiable and immutable, which removes the trust components, enabling the removal of trusted third parties.

Blockchain technology and its early adopters had a strong ideological base around personal integrity and decentralization. At the time, it largely revolved around taking back control from the traditional monetary system, which was centrally planned and managed by central banks. Also, from the almost monopoly situation of middlemen actors, like private banks and financial institutions that control custody and transactions in our economies and take a cut in fees for bridging trust, as discussed in the previous paragraph. One could safely argue that this control is undemocratic and a violation of personal integrity as it’s the opposite of opt-out. By being a doubtable but vital part of the current economic system, it can easily be used by governments to print money, causing increasing inflation that becomes an indirect way of transferring value from people that have fiat and by that nominally decreasing state debt with a lower valued national currency. Also, private actors such as banks are incentivized to take on significant risks, as we saw in the 08 financial crisis. Still, the banks got bailed out as they are system critical parts of the economy as it’s built around this trusted third-party infrastructure. The cost of mismanagement of the system is socialized through individual loss and governments taking the bill with tax money. With blockchain technology, the possibility of circumventing parts of the current system and, most importantly, avoiding trusted third parties.

In our previous article about digital ownership, we discuss the core value of NFTs. Decentralization is fundamental to genuine digital ownership, specifically for NFTs, which is why it’s a very important topic. As described in the mentioned article, NFTs are cryptographic tokens that exist on the blockchains and can be interacted with through the blockchain ecosystem tools. The first issue is that a blockchain includes a range of different technical solutions. From the lens of NFTs, the question is whether the blockchain itself that inhabits the token is decentralized. This is referred to in the intro as one of the more debated topics in the blockchain space. A good reason for this is that decentralization is a not-so-concrete spectrum with many variables. The deep technical aspects of protocol layer decentralization are something that we will not dig into here.

Apart from Bitcoin, Ethereum is the network that has been running for the longest time, which points to its robustness. With the crypto markets surpassing the trillion dollar mark in recent years, there have been significant economic incentives for exploitations. This would suggest that the network is soundly designed, and with many distributed independent nodes continuously validating the network, it has reached a good bit out on the decentralization scale. We chose to deploy on the Ethereum network partly because it is still the most robust technology platform but also has the lion's share of the crypto ecosystem and the network effects it brings. In the last couple of years, with the rising Ethereum gas fees and the subsequent growth of other layer-1 blockchains, many blockchain networks now have NFT functionality. Creators and buyers need to consider the blockchain on which the NFT is minted. But not considering the soundness of the technological platform, there are still points where decentralization can be exchanged for centralized solutions. The thing with the decentralization spectrum is that there are sometimes when centralized solutions with trusted third parties are a desirable option. This is because decentralization, as per the classic blockchain trilemma, essentially states the three variables of speed, security, and scalability. If you increase one, it will negatively impact the others.

So to generalize slightly to highlight factors one should consider when it comes to decentralization of NFTs, there are a few main areas to focus on when analyzing your NFT asset. We will go through them on a high level but return to the different factors for deeper dives in upcoming articles.

Protocol layer
As a cryptographic token, an NFT is a digital asset that “lives” on a blockchain. The security of the NFT depends on the security and sustainability of the blockchain network it is minted.

*Off-chain layer
*The NFT on the blockchain contains a small set of metadata but usually not the entirety of the NFT data. This means that the data, or what could be considered to be the NFT in practice, is stored off-chain. This introduces a level where it is possible to go with centralized off-chain storage on regular servers with a single point of failure. If servers are hosted by a company that shuts down, the data the NFT points to would be gone. On the other hand, there are decentralized and distributed storage options like Arweve, where there is no one point of failure, which would ensure that the data of the NFT are ensured to exist in the future.

Platform layer
While the asset could be decentralized, to “use” it, you would have to use interfaces or platforms that centralized organizations generally run. NFT interactions include minting, trading, and such actions where you usually connect your wallet to a marketplace. This introduces a few centralization risks that NFT users should be aware of not to risk losing their NFTs. It could also be platforms where you interact and use your NFTs, like games or Decentraland.

By bringing this topic up, we hope to increase the importance of decentralization and awareness of how it affects your NFTs. At Oases, we focus on decentralization as it is a vital part of the ecosystem and an essential feature. Don’t miss out on upcoming articles with further deep dives, and follow us or join our social media.

Oases represent the Metaverse, the new oasis of humanity. It also indicates that NFTs, starting as niche collectibles are rejuvenating the art market. Oases, as its name implies, is an open, innovative, and vibrant community. We are committed to providing trendy, engaging, and distinctive products and functions to meet the demands of our users.