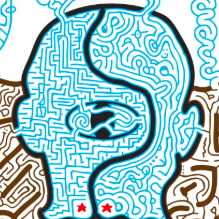 Below, you’ll find the Transformed Brain Labyrinth. On the surface, the image may look like a hand-drawn maze. But it’s only partially accurate to say that it’s “hand-drawn.” I created this unicursal labyrinth (a maze with only one path) by drawing two maze forms that repeat across the grid at different rotations.

The maze was inspired by the evolving interplay between humans and machines. Humans like to think that they identify jobs for computers to perform. But we’re increasingly seeing the inverse: systems where machines identify problems for humans to solve.

The labyrinth plays with the shifting power dynamic by making the human touch a commodity within a larger structure. The system squeezes the maximum value from the organic elements while tricking you into believing that the whole thing is organic.

A mindless traveler steps foot in the maze and embarks on the time-consuming chore of following each twist and turn. The aware traveler, in contrast, takes a step back to understand the structure and how the parts fit in the whole. After cracking the algorithm, you’ll feel satisfied with the labyrinth without the minutia of crawling through it inch by inch.