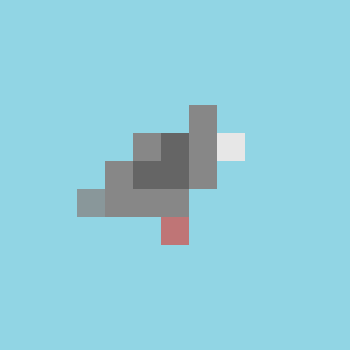 Where we are going… there are no roads… but there will be birds, trains, art museums, and dirty trash cans.

Development on Turf Explorer is moving along swiftly and we wanted to provide a slight update so that our Geographers have an idea of what we are cooking.

You all have collected a metric ton of wonderful things and we want to build the best web3 trophy case for you to show them off. Such manifestations include but not limited to - being your avatars, displaying your art, and perhaps one day giving a home to your NFT pets.

Step One, The Turf Explorer Map

We take an iterative approach to software development. Meaning that we build block components and release rather rapidly (note that our ‘rapidly’ is more rapid than most but less rapid than our rabid fans would like). The first and most essential foundation to our process is the Turf Explorer Map. From this single point stems all of the other cool features that we plan to build.

Before you turn your nose up at maps however… maps can be cool, no really, they can show you things that matter to us as a community:

Data is critical to the Turf ecosystem and revealing it in a meaningful way is essential to our master plan.

We have said in the past that Turf is a ‘casual ultraverse’. This isn’t just a fluffy buzz phrase that we toss around back at the lodge. When one thinks of a metaverse their mind wanders toward a world like Decentraland with streets and pathways. Although our map is similar to traditional metaverse worlds in spirit, it is different in many regards. We’re more Dwarf Fortress than Minecraft. We think that by lightening the UX and tuning it more towards chat/communication that we can create a space that fosters strong communities fixated on NFTs and NFT culture.

It is not our intent to compete with other metaverses but to find a beautiful symbiosis. We want to build the interwoven pipe-way that leads all in a glorious churn between virtual spaces.

Turf plots are very much real estate in the metaverse sense. Places for people to congregate and converse. You will be able to ‘stand’ on a plot and chit chat. Though our greater aspiration is to create many many meta-experiences on top. This is where our iterative process will truly shine.

Turf isn’t just about being your avatar in the superficial sense. In time other NFT projects will be tastefully integrated. This lofty dream may include tending to your Haus Pet or battling with your Gawds, but within Turf. We believe that weaving other projects into our fabric increases value for all.

10000 times a day (sometimes more) we are asked what is valuable in Turf? The simple answer is that everything is potentially valuable. Our project is very much a living piece of software that is ever evolving with the culture of NFTs. We have crammed in as many details as we could into each plot and as of yet these features remain untapped.

We have spent the last few weeks updating metadata to tease out the traits that we believe will be meaningful in the future. This is not to say that our plan is 100% mapped out. In reality it’s more like 0.01%. Providing innumerable details lends itself to a creative agility. If we feel that Gashapons for example are the best manifestation of random minting then we will build that feature.

A great example of this is Turfy Gifty which will be our first object interaction. From Gifty, participants will be able to mint gifts from within the explorer.

This is a fantastic illustration of our core UX philosophy of making traits useful beyond raw value/rarity. Maybe one day you will be able to play that arcade game in front of your plot or grab a snack from the vending machine. Perhaps your plot will become a legendary destination because it is host to the greatest tournaments in the land.

Last but not least, we wanted to show a feature that will allow Geographers to rule territories - who doesn’t love a good old fashioned Turf war? We are working on a system that will let groups of Geographers pool their plots. This is just a teaser of things to come and more details will be provided as we near its launch. Getting like minded folks together and supplying them with tools (pitch forks and axes) that enrich their communal tendencies is what Turf is all about!

Thank You As Usual

Thank you for taking the time to read this far. We know that our development process can be a mystery and wanted to demystify it a little. We are diligently working towards our grand vision and hope that you will continue to show your support. Without you none of this is possible.