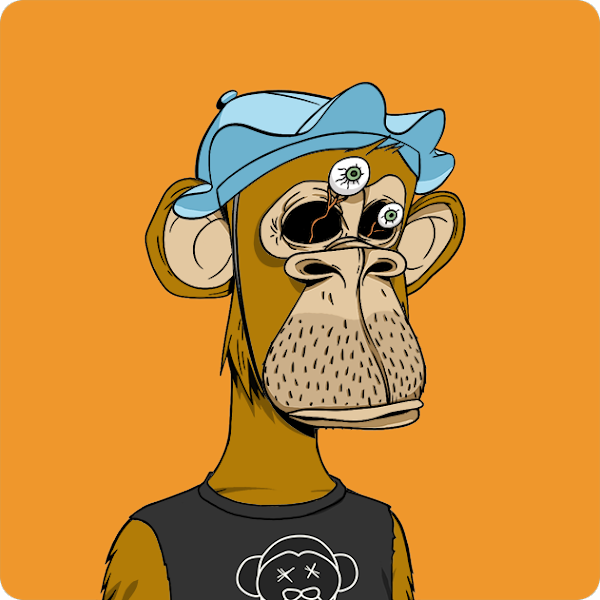 Before starting I recommend you to be familiarized with the concepts of cryptocurrencies, NFTs and DAOs.

Have you seen this glasses before?

If you haven’t seen it before reading this article, you probably will at some point.

Nouns.wtf started as an experiment around one year ago and is now one of the most successful examples of collective governance using NFTs.

They have a simple motto: One noun, everyday, forever.

Each day a new Noun is born in an auction that lasts 24 hours. Everyone with an Ethereum wallet is welcome to bid. The average price per Noun on the last month is 108 ETH, around 118 thousand dollars, not bad!

All the money from the auctions goes to a common treasury governed by Noun holders, each Noun gives you one vote on proposals and anyone with at least 1 Noun can also submit proposals for the DAO to vote on.

All art if cc0, that means no rights are reserved, you’re free to use Nouns glasses and traits in any way you want, including commercially.

Their main goal is simple: To make the world more Nounish!

To do so they are financing all kinds of cool ideas, from luxury glasses and skateboards to donations for charities, documentaries and creating public infrastructure for web3.

There’s no idea big enough and even the space is not a limit.

But as you may have noticed by the title, we’re not really talking about Nouns today.
We’re talking about Lil Nouns.
At more than 100 ETH entry price, Nouns are unattainable for most people, so here comes Lil Nouns!

The story: What’s Lilnouns and how it started.

Lil Nouns is an expansion DAO based on Nouns, think about it as their little Children.
Big Nouns are too expensive for most of the people, Lil Nouns come to solve this and bring a more accessible entry point.

Instead of one per day, there’s one new Lil Noun auctioned every 15 minutes, forever.
The average price per Lil on the last month is 0.3 ETH, around 330 USD

Do you see where we are going?

All the other parameters are like Nouns, the ETH from auctions goes to a common treasury that’s governed by the Lil Nouns owners.

When the project started it had the support of many Nouns owners, but now the community is growing in a different way, bringing in more people that aren’t on the main Nouns DAO.

Now you have a good picture of what Nouns and Lil Nouns are about, but, what is the point of it?

The purpose: Main values of the community

"Nouns noggles are like the Nike swoosh of web3" - someone

There’s no consensus about the main values governing the nounish communities, but one thing is shared among all participants: We want to nounify the world, making it more nounish.

In general people agree that it represents things where anyone can contribute and build together, support public goods and make the world a better place.

In my opinion crypto_tron#0705 put it really well on Lil Nons discord, this could be our motto:

We’re seeing the most successful experiment so far in DAO governance, building a passionate community that funds the craziest ideas and is open for all to contribute the way they can.
This creates an interesting positive feedback loop where funded proposals bring more eyes into the noun ecosystem, growing a bigger community, then more people decides to join the project and contribute, as Blowned.eth#5048 beautifully put, Nouns is about CC0 culture + experimental governance + inclusivity.

How to bring your idea to reality?

There are three main ways to get funded by the Lil Nouns DAO at this moment: the prop.house, Lil Grants and on-chain voting

Let’s check how each of these work:

Nouns has a cool problem, they have more ETH coming in each day then what they can easily allocate into ideas, so they came up with a good way to finance small projects without needing too ask too many questions about it or make it too hard.

Lil Nouns has its own prophouse there too.

The mechanics are simple, prophouses are structured in rounds, you have a period to submit your proposal, usually 7 days, and then voting is open for another 7 days.
Everyone with an ethereum wallet can submit an idea, every Lil Noun holder can choose their favorite ideas, each Lil Noun NFT is worth one vote.

If your proposal is the most voted in the round you win the ETH and build what you proposed.

Fun fact: This article was financed via Prophouse and was the most voted project on Round 2.

I encourage you to access the prophouse website and check submitted proposals on past rounds! This is the easiest way to bring your idea to life, the community is really open and you can chat about your proposal on discord before submitting it too.

Let’s get to the other stages…

Maybe your idea doesn’t fit the prophouse for some reason, either you need a different amount than what is up on the current round or you just want to do it in a different pace

Then Lil Grants may be an option for you.
The main way to submit an idea for a Lil Grant is using discourse, but you can also discuss it on Discord before sending it, there’s a channel there called #lil-grants exactly for that and it’s open for all members, even if you don’t hold a Lil Noun.

In fact, you can even earn your first Lil Noun and become part of the community by submitting a grant.

We have all kinds of ideas: Dune analytics dashboards, the German Speaking Community NounsDACH, newsletters, podcasts and gifs.

Bigger proposals are usually discussed on discord and then voted on-chain.

You can check all proposals voted on-chain at

Besides creative ideas, on-chain voting is also useful to decide protocol changes and important matters for the future of Lil Nouns.

Most of the proposals going on-chain are bigger than 10 ETH, although this is not a requirement. A minimum of 4 Lil Nouns is required to submit proposals.

Let’s take a look at what was voted and executed so far.

One of the goals of Lil Nouns community is to be among the biggest holders of Nouns, they bought 5 Nouns so far on proposals 4, 10, 17, 19 and 21. Proposal 27 was also approved and is queued to buy Lil Noun’s 6th big Noun.

Other approved proposals were funding the prop.house first 3 rounds with 15 ETH (matched equally with 15 more ETH from big Nouns DAO), 20 ETH for 3,000 Water Purification Educational Kits & Workshops for Students, buying the lilnouns.eth domain and give residency for lilal409 dedicate fully as a project manager/core contributor to the DAO.

This is just the beginning and I’m sure we’ll still see great projects born here.

Maybe your proposal can be next one to be voted on-chain?

How to contribute: Join the movement

After learning this all the main question is:

What are you going to create?

One of the most beautiful things on this movement is that there are no gates and big barriers for entry, anyone is welcome to join.
Enter discord and start talking with the community, check discussions on discourse and remember: no idea is too big or too crazy.
See you around!

To learn more about Nouns history: