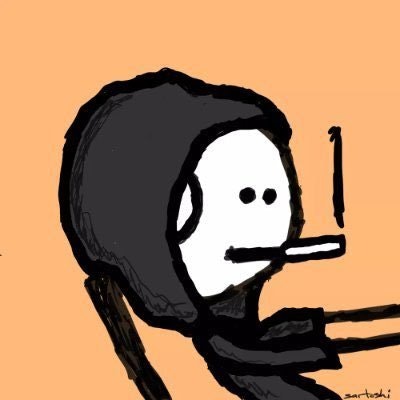 prior to reading this article please read: what are mfers by, sartoshi.

like, 4 or 5 mfers have been asking ‘what is mfer.world’ so here’s the backstory.

the origin traces to what seems to be a major issue of the internet and the nft space.

the internet, at its worst, is a series of echo chambers that reconfirm bias, brew misinformation, kill critical thinking, and encourage a lack of nuance. it makes sense to me that the early stages of “internet money” will behave in a similar way.

i may be a perfectly logical, kind, and open-minded person… but if someone tells me they bought bitcoin at $0.50, had the audacity to hold it 10+ years, and now it’s worth $40,000… regardless of how innovative the tech may be, there is always going to be this voice in the back of my head telling me to punch that mfer in the mfing face.

but, i know better… i’ll just send a tweet:

“bitcoin is a scam, a literal ponzi scheme, f any mfer who supports bitcoin.”

nuance is… absent.given circumstances are… unknown.
engagement is… through the mfing roof!

ten minutes after the initial tweet is sent, you’ve got five people who also know a person who bought at $0.50 cents and who don’t hesitate at the opportunity to sling around a series of slurs about bitcoin and the people who support it, creating a highly charged echo chamber.

a half an hour goes by and a pro-bitcoin person comes across the tweet. Forgetting there is a real human being on the other end of the keyboard, they opt for the all too classy and mature ‘quote tweet rage response.’

”sounds like some dumb mfer doesn't have any bitcoin.”

another few days go by and 300k people see the initial tweet, half of them change their profile picture to include laser eyes to signal a tribal-like alliance, a third of the people block those who don’t share their opinion, further contributing to their bias confirming echo chamber, and a handful of them continue to seek out arguments like this to repeat the polarizing conversation again and again and again.

now this isn’t healthy now, is it?

nfts bring about a more tribal and in-your-face example of the situation outlined above. it makes perfect sense that a person who was not in the right corner of the internet at the right time is upset that they missed out on life-changing money for something as simple as buying a dumb-ass JPEG of a monkey that, yes maybe shouldn’t be valued as high as it is? but, the market decides the price, so that’s the right price.

a cognitive dissonance begins to build among both parties.

my aim is to build mfer.world up from this one animated short into a platform that spreads the wealth made from nfts/cryptos and hire artists to make meaningful art that were not in the right corner of the internet at the right time. i hope to push back on the folks that claim nfts and crypto is just a zero-sum game by displaying a specific example of nft creative commons ip being used to create new art and new jobs for artists.

mfer.world is and will continue to be an effort to build the intellectual property of creative commons nft collections without asking for ETH, USD, or whatever the hot magic internet money of that given day may be.

i personally got into the nft space by making and minting meme-like collages to try to make some money during the pandemic. it paid to be curious, now i hope this project can make others who share this curiosity but don’t have that capital to use the etherum network to prosper as well.

please don’t mistake what i am saying and label me as some crypto evangelist. i’m actually quite against a lot of things that happen in this space. i have always been in it for the meme, it just so happens a meme is the fastest route to money for me and for those around me.

sartoshi tweeted recently that “you can state a roadmap that says where you will go, but you can also plant seeds and see where they grow” -- mfer.world is a seed ready to grow.

in conclusion, nfts are not all scams because some nfts are scams, but that still means there are a lot of scams and that is bad.