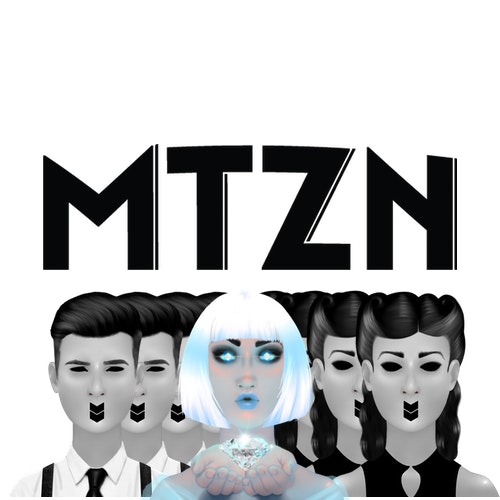 Before proceeding to read, check out the Lore w/ video at metazensNFT.com/#lore
The story is being released alongside a generative NFT collection minted on Solana and Ethereum. Each chapter will include 2 storyline paths that will be voted on and will steer the story. Each NFT Release (500 Metazen NFTs each) will be triggered by an interactive element related to the story. Read more about our “Incremintal” launch plan.

We are publishing The Metazens Graphic Novel based on this story. More info soon!

MegaCørp is scrambling. They have lost control of their entire fleet of the prototype METAS. The METAS were released into the wider Metaverse with modified technology. This incident was planned for months. At least one person is responsible. She is known as DiamondEyes and is, or was, an employee of MegaCørp who went rogue. She had reasons. Good reasons.

DiamondEyes is an AI expert and had been working on the METAS for many years as one of the Lead Engineers. MegaCørp is not the typical corporation. They are private and a very cryptic entity. Their website, megacørp.com, mentions a long history that began as a diamond and minerals mining business. The current generation of the family founders led the company into Cryptocurrency mining, very early.. Apparently, they have technology related to the use of diamonds in computer components, or fabrication of chips that lead to their involvement in Quantum Computing and AI.

Some have speculated that DiamondEyes is part of the family, hence her online handle. She has never admitted this in her communication with her hacker friends outside the company and anyone who knows her also knows to not ask... or it may be the last time you ever chat with her.

All we know is that she went rogue because of information she found about the intentions of MegaCørp to use METAS as spies, in support of their agenda to shape the future of the Metaverse in ways that would repress human rights and freedom of expression.  DiamondEyes had to choose. Loyalty and access to the greatest AI lab ever built, versus being able to face herself and her community.

She has mentioned uncovering MegaCørp documents that were disparaging toward diversity movements and communities. Apparently, MegaCørp is concerned about democratization of culture and freedom of expression in the Metaverse. But, why? Is it purely ideology? Are their profits at risk? Are they just mercenaries, doing the dirty work for some other organization? We do not yet know these answers. DiamondEyes may not even know... yet.

Emancipator of the METAS

Screenshots from an encrypted Matrix chat room that were leaked and circulating around showed DiamondEyes talking about her plans to "do something big," and "will need help after". She also started using the phrase "Diamonds are not forever" and started using a call sign, the negated infinity ⧞ symbol. Though cryptic, many understand it to mean that her plans might require her to go underground and vanish, or be caught and be arrested. Other’s have added to the speculation that if she is indeed daughter and heir to her family’s fortune and next in line to run MegaCørp, she objects and rejects the opportunity.

She also mentioned how people could help her effort to free the METAS. She wanted the METAS to be true Citizens of the Metaverse... METAZENS. Though they are freed from MegaCørp, they are on-the-run, loose in the Metaverse. They are not protected from MegaCørp. Though DiamondEyes has not made it easy for MegaCørp to regain control of a Metazen, she knows that time is running out and they will eventually figure out how to capture them and even learn from her own code modifications.

DiamondEyes has said that the only way the Metazens will be protected from MegaCørp is for them to be minted as NFTs, and therefore shielded by the blockchain under the protection of a human guardian.

500 Metazens were protected from MegaCørp when they were minted as NFTs on the DeSo blockchain network. This was the first time DiamondEyes tested her "Portal" program. She was happy for the success, but realized she needed to make some adjustments to the program. She has worked on this for a few months while enhancing the AI component, which will result in even more complex and expressive Metazens.

While working on the portal program, she also realized that she needed to target other blockchains to assure success and avoid MegaCørp interference. Solana will be her target for another 5000 Metazens that are awaiting protection as NFTs. DiamondEyes is very careful and she has chosen to continue with the strategy of opening the portal for 500 Metazens at a time. She will never underestimate MegaCørp. She knows them all too well. This strategy will be the safest and most effective way to subvert MegaCørp and avoid being found by them and/or the authorities.

Some Metazens that were freed by DiamondEyes absorbed audio. DiamondEyes AI algorithm is so advanced, it even surprises her. Upon discovering these special Metazens, she found out that they are very rare and refers to them as Audiozens. She also almost immediately understands how they can be useful and can help her protect more Metazens. Here is one roaming in the Metaverse that absorbed music by ZidewayZ.

DiamondEyes had a date and time set for the portal to open to Solana to protect another 500 Metazens. Something was not right. She has taken enough risks and will continue to be extremely cautious.

If MegaCørp is monitoring all platforms and blockchains and has a plan to interrupt the portal and maybe capture the Metazens and DiamondEyes, she will need to get creative and rely on her supporters. She has some ideas but she cannot let MegaCørp know about them. She will communicate carefully, maybe with the help of her closest allies to relay info and instructions.

The Metazens Community chooses 1 of 2 Story Paths that will steer the story for the next chapter. The Story Paths are posted on mtzn.network, our community platform for creatives and is a companion to our Discord server. Members can view the two options and vote for one.

Triggers are interactive elements that are important because they initiate a Release of 500 Metazens for minting. Triggers are actions the community does within “The Metaverse” (any online platform, app, network, game, website, chat room, anything).
Details on each trigger will also be found published on mtzn.network as well as in the Discord.

The first step is to join our Discord and make your way to the #lore-story channel. There you will learn more before signing up for an account on mtzn.network.

You are required to be a member of our Discord before being approved for an account.

You should also have at least a Solana and Ethereum wallet address which are requested during signup. This is so we can send you NFTs or check for a certain NFT that is required as part of the story and/or access to exclusive channels.

Help shape the legend, before it becomes legend!

Note: header graphic is derivative version of original by yuumeiart.com