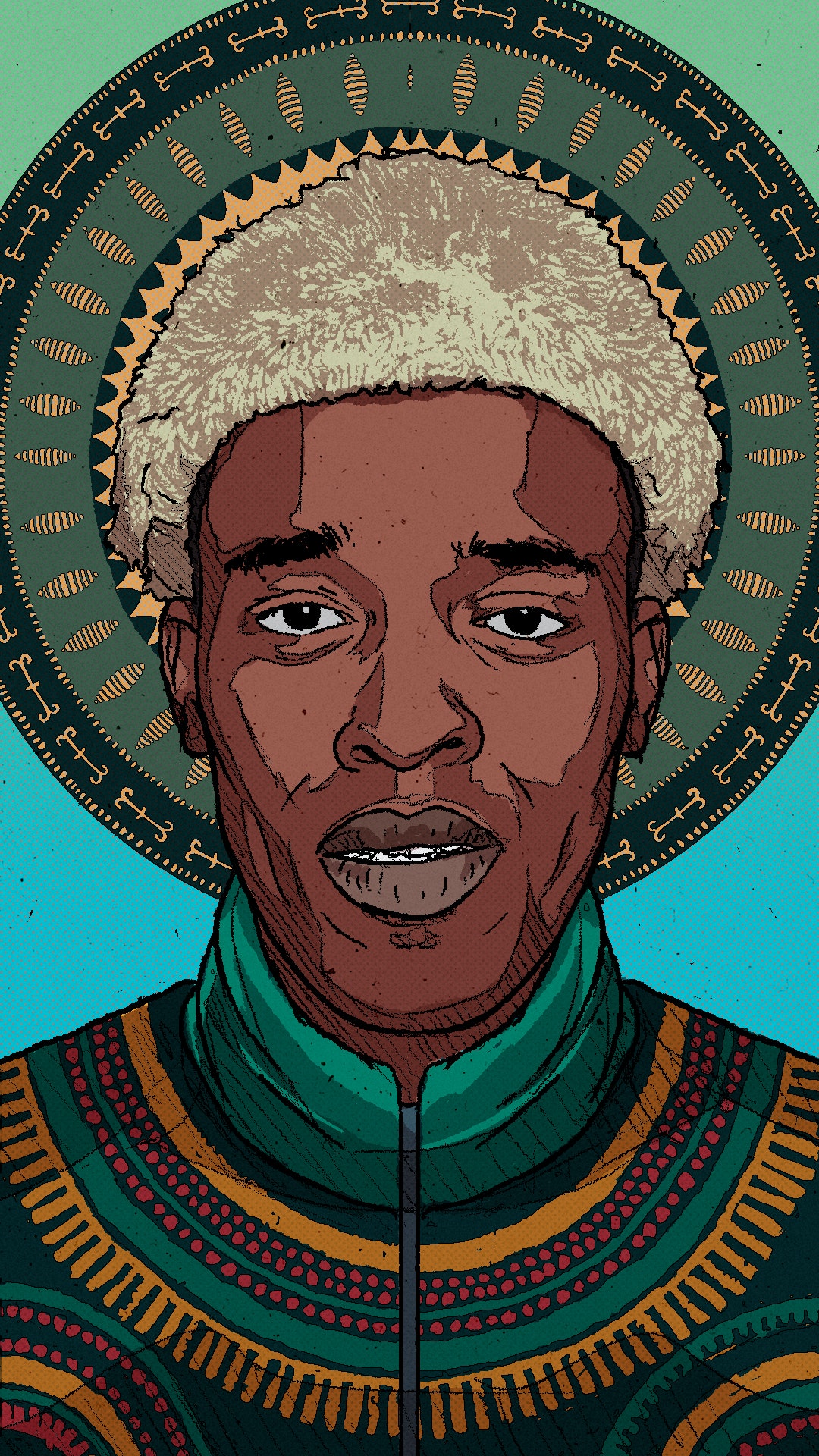 As envisioned in the prologue for this epic journey across the metaverse, the plan is to release a song every three weeks of 2022; bringing the ideals of the music to life through the creation & distribution of distinct, unique, collaborative artistic offerings.

Our intention is to build in public across traditional distribution channels as well as experimenting with new models for artists to work together, form communities around their work, plus grow and realise value for both supporters and themselves.

The narcissus parable is a fable from Greek mythology where an eponymous hunter, son of the river god Cephissus and the nymph Liriope, was renowned for his extraordinary beauty.

Some say he came upon a river and was so enamoured by his own reflection that he kept drawing himself closer to it until falling in and drowning.

Others say he spurned the adulation of all who came before him with arrogance, disdain, and contempt. So much so that the Oread nymph Echo meandered through the woods for the rest of her life languishing in such pain from the rejection that all that remains of her is the sound of her echo. Nemesis (her mother), god of revenge and retribution, led him to a pool; there, the man saw his reflection in the water and fell in love with it. Although he did not realise in the beginning that it was just a reflection, when he understood it, he fell in despair that his love could not materialise and committed suicide.

The moral of the story holds true to this day. For instance we see it through the impact of social media which has led to greater usage of tools such as photo editing, cosmetic surgery and make-up to manifest an idealised version of ourselves to the world.

On the one hand this can be a wonderful equaliser, our behaviour is incredibly affected by beauty so those who have not been naturally gifted, within the bounds of the conventional beauty standard of the time, are equipped to combat this bias we share.

On the other hand braggadocio, confidence and pride which achieving this beauty standard (and its benefits) can elicit very easily boils over into vanity, arrogance & cockiness without the humility to keep the ego in check. This can be the difference between success & self-sabotage.

“You might have ideas I have vision,
been cooking up heat with precision
I’ll listen but only politely
My orders come from the almighty”

The initial song idea, and first verse, from Papa was loosely formed on guitar before anatu conceived of sampling this NFT from the team over at Minted Melodies

This was already on fire!

After sending the track round artists on the dojang ethical music label there was an immediate response from Gabriel with some pure lyrical lava. Then Kallay tops it off with his trademark fuego and the song is complete.

The graphic image design is a collaboration between Yin and shoshinfilm whose work spans photography, illustration, animation, and film. The original vision for the illustration sought to examine how difficult environments have the ability to birth the most beautiful, resilient, and characterful outcomes - be they people, or relationships, or perspectives. Much akin to the diamond formed out of sand under extreme pressure.

The original black and white construction of this theme embodies the water/mirror concept in the narcissus fable which adds to the synchrony of this truly impactful piece. Each floral and colour variation offers a different interpretation of the central message that celebrates diversity of thought, provenance, and beauty aesthetic.

We take great pride in the team collaborating across three different continents from Hong Kong, Ireland, Georgia, and Kenya. As the journey develops we hope to connect with, learn from, and pass on our insights to many more from around the world in service of the unique contributions we all have a capacity to make.

The blockchain chosen to launch the series is Tezos.

The art in this community is about as experimental, fun, and adventurous as I've come across. Especially for relative newcomers to the space who still aren’t especially sure how to code solidity, develop custom websites for minting, etc.

For beginners what’s great about tez is that transaction fees are cheap, the network is robust and fast, the platforms and wallets are really intuitive to use, and the chain has a proven history of working well. And even when one of the main pillars of the NFT space on tezos failed, the community was able to rally together and bring it back to life!

The network itself is governed by the community and is decentralised such that no single entity owns, manages or controls it. Tezos uses an energy efficient process called proof of stake (as opposed to the energy intensive proof of work) giving rise to the moniker #cleannft

Some heroes that create on tezos (whose art i’ve collected a lot of!) include:

There are so many more that I absolutely adore [EsoTeros; TokBlok; KonstantFLUX] that it is a dream to build something inspired by the steps they have set forth in forming healthy creative communities that connect, appreciate, and imagine together.

The incredibly popular Hic et Nunc (HEN) platform hosted NFT’s on Tezos before others like Rarible (on tezos) and FxHash became established. The platform closed suddenly with its founder (Rafael Lima) no longer wanting to continue the project. The art that resided on the platform remained on the blockchain and the community was able to use the smart contract to create a number of mirror sites which maintained the service, ethos, and virtues of the original site whilst incorporating a number of innovations.

In choosing which platform to host narcissus it was important to us to have the ability to automatically, trustlessly, split any royalty proceeds between the team forever. Matthew Plummer-Fernández made this possible on a HEN mirror using an experimental collaborative tool for creators which we will use to mint this collection. Newer entrants like the versum platform take this further by prioritising the art through minimalistic UI, quickly delivered content, & social integration. So far the only drawback we’ve observed is our inability to undertake splits at the primary sales level automatically; although they do enable this for all secondary sales.

First, collect wallet addresses for the team & set up the community wallet. This wallet file was then imported into temple and renamed (using maximised view) “Legacy Community”. The team then added 20 tezos balance to pay for transaction fees.

Note: if you create an additional wallet in kukai as we did, when you import it into temple using the mnemonic, do NOT use the password for kukai since it will generate a different wallet address!

Second, we sync with hecticnun.xyz, create a quick username & description for the art.

Fourth, we sign in through this collaborative contract and go to mint (click on the collaborations section from menu, then next to the contract it says ‘sign in’).

Fifth, we mint 100 artworks. In order to use the splits contract, these have to be minted 1 by 1

Sixth, we ‘swap’ the artworks for sale at 1 tez each. This entails an additional 100 transactions on the tezos network and is less time consuming than previous stages since entering the details & uploading the art itself is not required, as it was in the mint. Total cost for these transactions comes up to just under 5 tezos.

Seventh, validate the artworks from each of the splits wallets at a cost of 3 tez for 100 works, per collaborator. This requires each artist on the splits contract to manually, individually, sign and verify each piece of art (a hundred times in this instance). The question begs, is it worth any of the artists’ time & tezos to make these transactions just to verify an artwork they will end up getting paid for either way? We’re talking about up to 70 hours work (that’s if the network is at normal speed) & total cost of [tbc]. The trade off here is that without verification the artworks are presented as “unverified” and it is unclear how off-putting this would be to supporters. It is understandable why this exists, to make sure those who use the service do not include unaffiliated parties on the contract for clout, but a batch solution would save both time, effort, and tezos here.

Perhaps in web2 uploading 100 unique artworks or products to an e-commerce store would take the same time as the minting stage alone, without the costs or additional steps of swapping and validating. To compare this process to music release in web2, it takes between 1-3 hours to distribute a release, create the required metadata, create a fanlink & set up a splits contract.

Is not the artist’s struggle mainly rejecting all manor of activity which draws them back into the momentum of the world? The artist’s first creation must be the time and space in which to create their other works of beauty - perhaps this is the most difficult part of all. Of course this is the pure purpose of a management team, to enable the artist to give all of themselves to the art and relieve them of the administrative burdens of distributing and marketing their works.

The aspiration in all this is to better understand this emerging suite of tools is able to help artists realise the value of their work. Across Web2 this value is defined for you.

Two weeks after the narcissus release the track was streamed 5,000 times on Spotify (the most abundant of all the services) earning $20. This is a modern marvel enabled by platforms such as Revelator which serve to publish musical works and enable global distribution. This framework, and these methods, do earn a living for a small cache of artists able to garner millions of streams. Typically this would be supplemented by live music revenues, merchandise sales, etc. However during the pandemic we have seen how precarious this income can be. For the majority of artists, this model simply doesn’t work.

90% of streaming royalties on Spotify go to the top 1.4% of musicians. The top 1% of all streamers earn more than half of all revenue on Twitch. 1% of podcasters claim the majority of podcast ad revenue.

Web 3 offers the promise of recognising value through price discovery whereby the community [rather than centralised organisations] determines the value of the art. This can be achieved through dutch auction for instance where the art value begins overpriced then comes down in increments over time till a piece is acquired at a fair price. This can also be achieved through the artist underpricing the art, such that it is really accessible to anyone, then leaving it to collectors to determine what the real value is on the secondary market. As transactions are made, and the true/fair value of the works is uncovered, the artist is incentivised to continue to build on these initial foundations as well as rewarding early supporters. This is our choice.

As the project develops more direct comparisons between the Web 3 and Web 2 will form a key part of this mission. We want to hear from all inspired to contribute. Key priorities like website building, API integration (for ease of analytics), and coding solidity are very welcome additions.

100 unique & colourful variations on the cover artwork for the song ‘narcissus’ by Papa.

To collect the art there are three stages

And will be sharing the art for the song on Solana in the coming weeks.